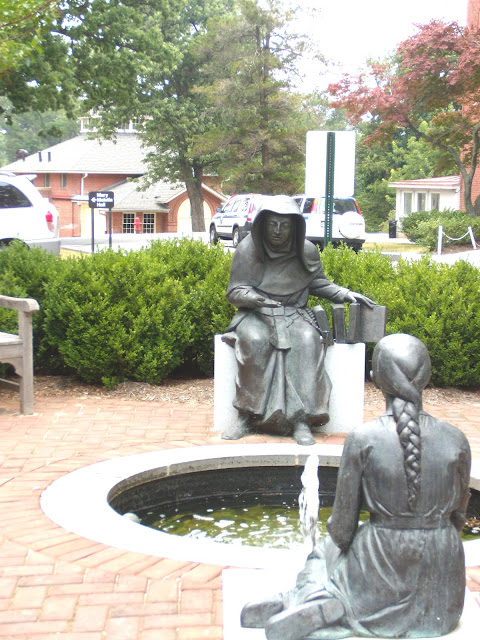 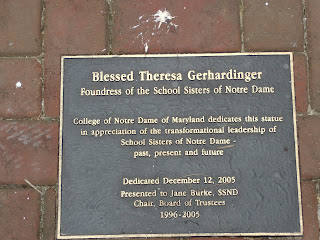 My Italy adventures during the summer of 2010 began in late June at Notre Dame of Maryland University. I traveled to Baltimore by Amtrak train and was met by a representative of the campus, who took me and my bags by car to a pleasant residence hall. The two Roman Catholic nuns who were running the program were Sr. Therese Dougherty and Sr. Theresa Lamy. Therese, in general, ran the academic end of the program, and Sr. Theresa ran the administrative end. Both were helpful, kind, and wonderful! The campus was lovely as well. The summer study program they ran had been funded by the National Endowment for the Humanities.

About five months before my adventures began, my Walker Hound accidentally knocked me down while he was playing with his friend, a standard poodle mix. Walkers are fast, powerful animals, and he tackled me in the left knee with his shoulder. The pain was incredible, and my knee has never been 100% right since then. My orthopedist, Dr. Shall, suspected he knocked my patella (kneecap) out of place.

When I started this program, I was still in pain, undergoing physical therapy, taking drugs, and doing all kinds of exercises to strengthen the knee and relieve my suffering. For a while there was doubt, at least in my mind, about whether I could even accept the grants. But Dr. Shall cleared me to go. He told me that if I continued to do my exercises every day I would be 80% better by the time I got back from Italy.

I had doubts, and so did my fellow participants. When I arrived at the campus I walked from our dormitory across the parking lot to the dining hall slowly and with great difficulty. I had traveled to Italy on summer study back in the 1980s, so I knew this trip was not going to be for he faint of limb or faint of heart. But I was determined to give it my best shot and not to hold other participants up.

In the end, Dr. Shall was right. Not only did I make it through the program, but it was actually therapeutic for me. I avoided surgery by doing the exercises. And all the walking, hiking, and stair-climbing I did on this trip strengthened my knee. My time in the summer Italian sun was much less depressing than visiting the physical therapist, too. I even managed to climb Mt. Vesuvius during my second visit, but I'm getting ahead of myself.

I wish doctors could prescribe similar trips, perhaps with a stay at one of Europe's many health-spa resorts, to patients with symptoms similar to mine. If not exactly restful, my summer was certainly healthful for mind, body, and soul. For more images of the campus, visit this Flickr set.

I should also mention that I spent quite a few months learning some phrasebook Italian. I can't recommend enough at least a little Italian for anybody who plans to spend time in the country. Anyone who has toured the country and told you that most people speak English is WRONG. This is true of the tourist-traps, but not the rest of the country. Besides, it's just polite to learn a little about the language and customs before you go. The most useful thing I did was to pick up some Berlitz Italian CDs in a local discount/close-out store. I listened to these over and over during the course of several weeks, mostly as I was falling asleep. When I felt comfortable I knew the whole disc, I would play them in my car as I traveled back and forth to work, reciting the Italian out loud and playing each section over and over until I was pretty confident I could make myself understood.

It worked pretty well. The main drawback to this method is that you speak enough Italian, and decently enough, that folks that you speak to in Italy actually think you understand Italian. They'll talk to you a mile a minute, and you're not well prepared to follow what they're saying unless you get lucky and they hit something you've practiced in a script. But if you live, like I did, in a spot where it's impossible to take an inexpensive course, it's better than nothing. Even if you take a course, practicing scripted dialogues helps you develop your listening skills and pronunciation. I highly recommend it.

I would like to thank the folks at the National Endowmnent for the Humanities for making this portion of my trip possible.
Posted by Unknown at 6:11 AM No comments:


I am a Latin teacher. Until the summer of 2011 I worked in communities with high poverty rates, either urban or rural, most recently in North Carolina. Toward the end of this time, North Carolina, in its infinite wisdom--please note the sarcasm here-- decided to make staff development in one's content area mandatory for renewing teaching licenses. Finding high-quality staff development in Latin near home or at an affordable price turned out to be nearly impossible.

Desperate, I applied for grant money from three different organizations for summer study in Italy. I was lucky enough to land two of them. Hence, an awful situation turned into a learning experience of a lifetime as I spent a week in Maryland, preparing for the trip, and then six glorious weeks in Italy. Funding for Maryland and the first four-week program in Italy came through the National Endowment for the Humanities. Funding for a the two-week program, which dove-tailed perfectly with the first one, came through the Fund for Teachers and the Rural School and Community Trust. The two-week tour was with the Vergilian Society. Our groups studied mostly in Rome and its environs and in Southern Italy, especially Campania and the surrounding islands of Capri and Ischia. We also made forays into Etruria to study the ancient Etruscans.

I originally blogged about this trip for the benefit of my students and of students everywhere. It was also part of a requirement for the second grant. That blog is no longer available, so as I have time I plan to re-construct my adventures as much as possible from my original notes and digital photographs.
Posted by Unknown at 7:14 PM No comments: